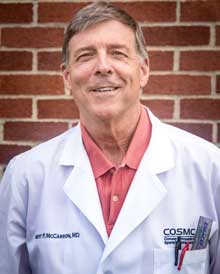 A native Arkansan, Dr. Robert McCarron received his medical degree and performed his internship at the University of Arkansas. He completed his orthopaedic residency in 1982 at Texas Tech University Health Sciences Center, as well as two fellowships: AO International Fellowship at Kantonspittal in Basel, Switzerland and a spine fellowship at St. Vincent’s Hospital in Victoria, Australia.

Following his fellowships, Dr. McCarron returned to Texas in 1983 as an instructor and assistant professor of orthopaedic surgery at Texas Tech. In 1988, he moved back to his home state of Arkansas and planted his roots in Conway, where he founded Conway Orthopaedic & Sports Medicine Clinic.

Since his return to Conway, Dr. McCarron has been actively involved with Conway Regional Health Systems. He has served on more than a dozen committees, and he has been a trustee of the board of directors from 2000 until 2011, serving as Board Chairman in 2005 and 2006.

He and his wife of four decades, Vicki, have two grown daughters, Beth and Jennifer.

Learn about orthopedic conditions and treatments from A to Z in our interactive patient education library.